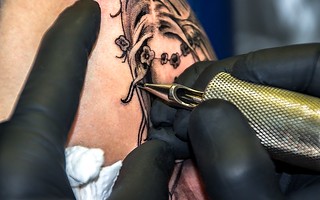 The art of tattooing goes back thousands of years in human history. In the beginning, prehistoric man used animal bones and ingredients to apply tattoos. These crude tools eventually evolved into metal instruments, and then into machines. Essentially, they are all used to apply ink into our skin to create body art. These tools all acted as tattooing needles.

There is something about tattoos that cater to mankind’s desire for aesthetics and individuality. The significance of tattoos throughout our history makes them relevant until today.

Ink in the Dermis

The rotary machine is a machine that moves the tattoo needle by using a rotating circular bar. This disc-like mechanism moves the needle forward and back with enough force to pierce the skin. It delivers the ink into the skin to create the tattoo.

Tattoos can still be made even without these modern techniques and machines. Artists can create tattoos in a more traditional sense, just meticulously using the tattoo needle and ink. Some indigenous groups still prefer this old way because they treat it as a sacred act.

There are many kinds of tattooing needles used for different types of tattoos in the modern sense, with or without coil or rotary machines. Whether you need to draw a fine line art or fill large areas with color or shading, there is a specific tattoo needle for the job. Tattooing needles are categorized by the needle’s form, configuration, and function.

For Fine Lines and Detailed Tattoos

A variation on the round tattoo needle is the round shader. It is fundamentally the same as the round needle in form. Round shader needles are placed together in the shaft just a bit looser, and are a bit larger in size and diameter. These tattooing needles are used for filling large areas with color, shading, and creating bold thick outlines often seen in Japanese tattoos.

Flat needles are tattooing needles soldered together and laid out horizontally in a single row. They are primarily used in filling in large areas of tattoos with color. Artists favor this tattoo needle when making clear and dark lines. In just one stroke and pass, tattoos can be filled in and shaded using flat needles.

For Shading and Coloring

For tattoos that require a lot of shading and coloring over larger areas, magnum needles are used. Magnums are made up of two rows of needles, totaling to 7-11 points on average. There are different variations of magnum tattooing needles that have different purposes.

Weaved magnum needles are the most common, which are used to cover larger areas in tattoos for color filling and shading. They are soldered relatively wider apart from each other in their rows. This is to deliver more ink efficiently with fewer passes.

The newest variation of magnums is called the round magnum needles. These tattooing needles are essentially the same as the basic magnums, but the points have a curved arrangement at their ends. This results in the needles’ points conforming better to the skin upon contact, doing less damage, and allowing for better ink delivery and consistent line work in tattoos.

Thinner Take on the Magnum

Bugpins are another type of tattoo needle that is arguably a variation of the magnum. These are much thinner versions of magnum needles with smaller diameters. Bugpins are especially used in shading work on tattoos. This category of tattooing needle is very polarizing, as many different artists disagree on how it is best used in their craft. Some artists will say they are great for many different kinds of tattoos, while others might only use them for very specific shading.

A variant on all the mentioned categories of tattooing needles is the textured needle. It is a type of needle that has rough and unpolished ends. These ends hold the ink better, and therefore result in better coloring and filling for tattoos. The ink in textured needles is delivered in larger quantities instead of just dripping out. Any kind of needle can be textured to be used for solid color tattoos, specifically.

An alternative to the above mentioned needle categories would be cartridge needles. They come in all of the categories described above and are attached to specific coil and rotary machines.

These tattooing needles are very convenient and consistent in their performance. They are reliable since every cartridge needle can work with many different kinds of tattoos. Cartridge needles are easy to set up but must be thrown away after use.

That is the downside of cartridge needles: they are only good for one session. Unlike other tattooing needles that can be sterilized and reused to create other tattoos, cartridges can be expensive for newer artists because of their single-use nature.

The Perfect Tool for the Job

There are so many categories of tattooing needles and different variations on those categories that it is easy for a new tattoo artist to get overwhelmed and confused. It is best to do your research and communicate with your clients.

Different tattoos need different tattooing needles. As a craftsman, and as an artist, the right tool must be used to get the job done. Ultimate Tattoo Supply has you covered for anything you might need to make your best piece yet!

The Ultimate Choice for Tattooing Needles